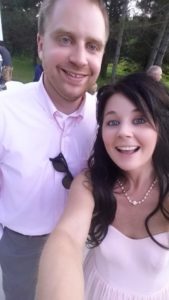 To us, community means standing with each other, showing our support through both the good times and hard times. This means that as a company, Shred Right cares deeply about our employees, the people they love and the causes they care about. When account representative Allana Kern shared with us about her brother’s battle with cancer, we wanted to help in any way we could.

This is Todd’s story, as told by his sister and our account representative Allana:

My brother, Todd, was diagnosed with cancer on his sixteenth birthday. He had noticed a lump on his forearm during his sophomore year of high school and it seemed to be slowly growing. When he showed my mom, she decided to take him to the doctor. We received the news on June 20, 2005; Todd had Alveolar Soft Part Sarcoma (ASPS).

The lump was soon surgically removed. This surgery was followed by six weeks of radiation therapy at U of M. Everything was looking up, until June of 2007, when multiple spots of ASPS were found on both his lungs. Todd spent the summer after high school graduation in the hospital getting the cancer surgically removed. When he would heal from the surgery, back it came.

Today, Todd is 28 years old and the ASPS remains. U of M, Cancer Treatment Centers of America and his current oncologist have all agreed it would be best not pursue any specific treatment at this time, other than regularly monitoring it via CT scans.

Very little is known about this cancer and since it is so rare, research relies completely on private donations. Chemotherapy is generally not helpful to this type of cancer therefore surgical removal is the main treatment.

I had the pleasure of telling Todd about the donation Shred Right made to ASPS research. Todd’s response was, “Being afflicted with this cancer for 13 years, the generosity from Rohn Industries/Shred Right, from people I’ve never personally met, means so much to me.”

“ Shred Right has been our company of choice for a number of years. As a bank, we have a large amount of data that needs to be taken care of properly and the folks at Shred Right take care of that.
FNB Osakis
“ I would highly recommend Shred Right to anyone looking for safe and secure document destruction. They provide a very professional and timely service.
State of Minnesota
“ Friendly, reliable staff, who are always on time. Trucks that are built for safe handling of sensitive information. We are very happy with the safety and confidentiality. It's always a good day when Shred Right comes!
First National Bank Northfield
“ Shred Right provides great, reliable service we feel very good about. Highly recommended!
Ridgewater College
“ Shred Right has been a great document security company to do business with. The customer service team is very responsive and the driver we have does a great job at minimal disruption.
Micron Metalworks
“ Shred Right has good service, is flexible and prompt. We like that service is on call and as we need for pick up.
Integrity Wealth/Raymond James