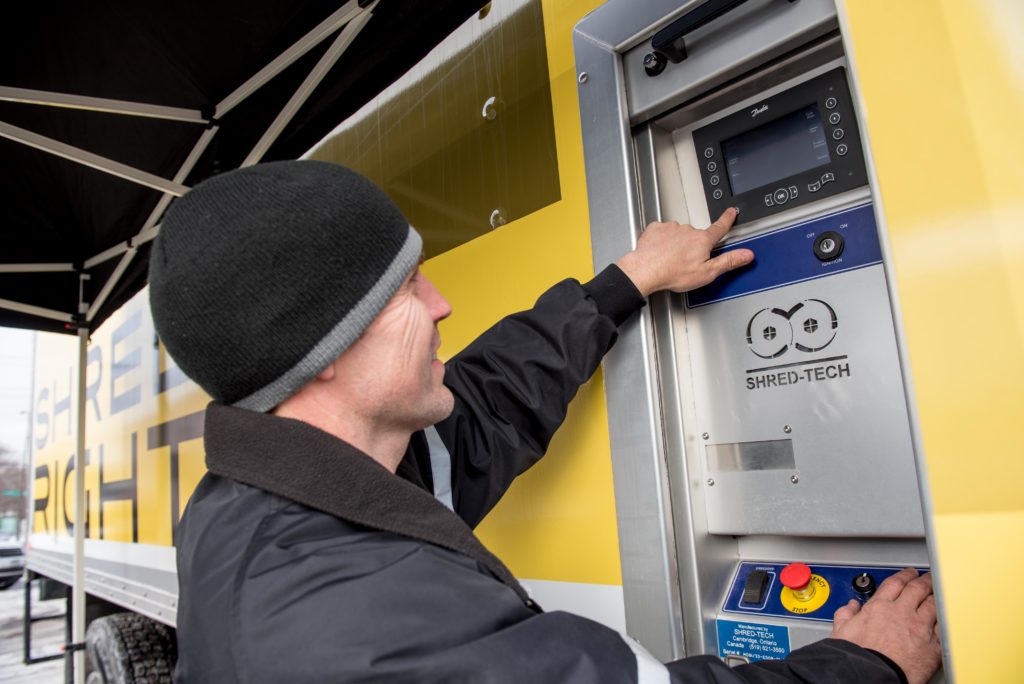 Pablo Picasso once said, “The urge to destroy is also a creative urge.” From the implementation of papyrus sheets (paper’s closest relative) in Ancient Egypt in 3000 BCE, humankind has had significant creative urges. If you’ve been keeping up with our journey through the historical developments that led us to today, you know that shredding technology has made leaps and bounds since the creation of paper in the early 1800s.

With Johannes Gutenberg’s invention of the printing press in 1439, the printed word exploded as the most lasting and efficient way to express and communicate. However, not long after man discovered he could record his thoughts, he felt the need to destroy any record of those thoughts, but with no way of doing so.

Fast forward to 1909, when an American named of Abbot Augustus Low filed a patent to solve that problem, with an invention he called a “wastepaper receptacle.” It could either be operated manually with a hand crank or motorized and featured a relatively simple mechanism. Though his invention was not well met by others at the time (and was never manufactured), the beginnings of the shredding machine were born.

Then, in 1935, a German man named Adolf Ehinger drew inspiration from kitchen utensils and invented what would become the paper shredder we know and love. Though Ehinger created his device to destroy any traces of his anti-Nazi propaganda, future versions of the device have been used by militaries, banks, businesses and governments across the globe ever since. In fact, that’s why shredding started out with a pretty bad rep in the eyes of many; what would the story of Watergate be without the paper shredder?

In the 1950s, in the wake of WWII and in the midst of the Cold War, Ehinger motorized his shredder and marketed electric paper shredders across Germany and the rest of Europe. His company, EBA Maschinenfabrik, is still in operation today.

In fact, the importance of the crosscut paper shredder (when previously, vertical shredding was the only real option) actually followed the invasion of the American Embassy in Tehran. That day in 1979, while American ambassadors were shredding classified documents, Iranian militants seized the shreds and pieced them back together with their female counterparts – who spent most of their days weaving Persian carpets.

These days, shredding isn’t just for corrupt politicians. In fact, for most, paper shredding is the most efficient and cost-effective solution to the stacks and piles and files that clutter their lives. With Shred Right, document destruction is easier than ever, through Shred Right’s mobile on-site, off-site shredding vault or drop-off shredding services.

Shred Right doesn’t just have the solution for all your paper shredding problems; we also provide IT and product destruction (and yes, we recycle too). Get in touch with us to set up a shredding service and prevent your confidential information from becoming a historical headline.

“ Shred Right provides great, reliable service we feel very good about. Highly recommended!
Ridgewater College
“ I would highly recommend Shred Right to anyone looking for safe and secure document destruction. They provide a very professional and timely service.
State of Minnesota
“ Friendly, reliable staff, who are always on time. Trucks that are built for safe handling of sensitive information. We are very happy with the safety and confidentiality. It's always a good day when Shred Right comes!
First National Bank Northfield
“ Shred Right handles all of our needs with efficiency. They are always on time and delivered what was promised.
United Prairie Bank
“ Shred Right has good service, is flexible and prompt. We like that service is on call and as we need for pick up.
Integrity Wealth/Raymond James
“ Shred Right has been our company of choice for a number of years. As a bank, we have a large amount of data that needs to be taken care of properly and the folks at Shred Right take care of that.
FNB Osakis