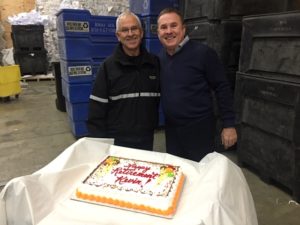 Kevin retired in December after 16 years with the Rohn Industries family. Initially, he joined Document Destruction Services, an organization that Rohn acquired a few years ago, and found his place doing what he loves, driving.

So when we asked Kevin what he’s going to miss about Rohn Industries, he said, “I’ll miss the people. I was just telling my son about the friends I had made over the years at this job. You don’t have too much time to chat with the customers but more than half of my stops were long-term clients so they were people I had gotten to know. Going without seeing them will be a definite adjustment.”

Kevin joined Rohn Industries and Shred Right before they had the nearly eighty employees that are currently employed. Kevin says, “They seem to be getting more and more clients every day. I think they are competitive thanks to their varying services, particularly offering hard drive and product destruction which other shredding companies often don’t have.”

When we asked Kevin what he thought made him successful in his role for the last 16 years, he explained, “I stayed because I liked the job, the people I work with and the customers I service. I think if you have a good attitude people will enjoy working with you which makes your job even better! The four day work week was also always a plus for me.”

So what will Kevin’s life in retirement look like? Kevin says, “First, my wife and I are planning to visit my brother in Arizona in January and February. I’m not a sit around type of guy so once we get back, I’ll probably find something else do to. I like to keep busy!”

From the whole team at Shred Right and Rohn Industries, we want to wish Kevin all the best in retirement!

“ Friendly, reliable staff, who are always on time. Trucks that are built for safe handling of sensitive information. We are very happy with the safety and confidentiality. It's always a good day when Shred Right comes!
First National Bank Northfield
“ Shred Right has always been prompt and willing to work around any time frame that we have in mind. They are a very friendly company that resolves all of our data-destruction needs.
National Communication Services, Inc.
“ I would highly recommend Shred Right to anyone looking for safe and secure document destruction. They provide a very professional and timely service.
State of Minnesota
“ Shred Right has been a great document security company to do business with. The customer service team is very responsive and the driver we have does a great job at minimal disruption.
Micron Metalworks
“ Shred Right has been our company of choice for a number of years. As a bank, we have a large amount of data that needs to be taken care of properly and the folks at Shred Right take care of that.
FNB Osakis
“ Shred Right has good service, is flexible and prompt. We like that service is on call and as we need for pick up.
Integrity Wealth/Raymond James