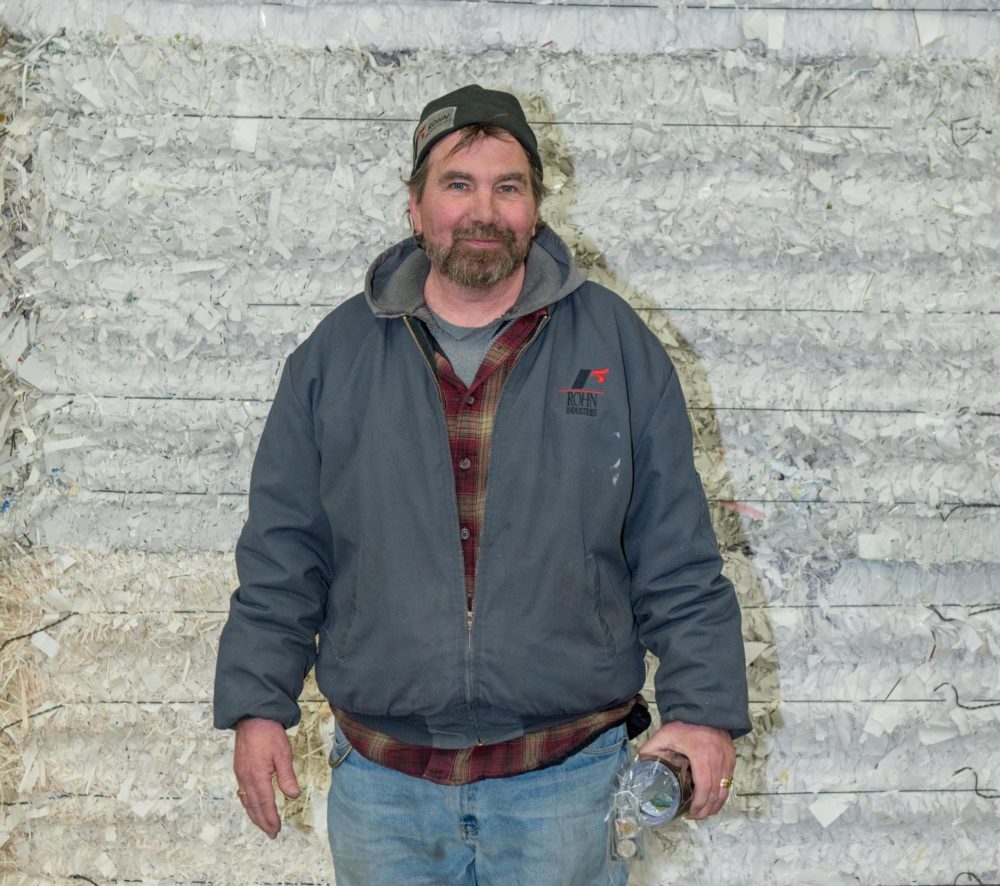 Meet Dan Mortenson! He has been with Rohn Industries from almost the very beginning, over 32 years! Dan’s role at the company has grown as the company has grown. He began sorting paper grades by hand out of postal carts and PPT’s.  The rest of his day was spent out in the truck helping collect paper in a two-man operation using a hand jack to load the containers onto the lift gate of the truck.

Dan has worked his way up to supervisor, 1st shift manager, 2nd shift manager, overseeing warehouse staff, operational areas and training of employees and equipment. He has done every role from sorting to helping install balers in his tenure with the company.  Dan has also been with the company through its three moves. The company outgrew the 2nd location very quickly and was overrun with paper and Dan says they “couldn’t hardly move to sort paper.” A small baler was installed in the second location, and Rohn kept growing. The 3rd and final move was to the 862 Hersey Street location, and Dan recalls it was a very big move. He remembered how the company really picked up steam, added new employees, new trucks and new business. Dan has been amazed at how the company has grown from a pickup truck operation into a fleet of trucks.

One bay at a time, Rohn Industries has taken over the current building, and operates out of two buildings.  Dan takes great pride in being a part of the company and its growth through the years, and he likes the nice new machines and vehicles.

Dan’s position has existed since day one and will be here in the future. Working with paper requires you to be hands on and to feel the material. There is a learning curve to understanding paper grades and material codes for sorting and prepping for the mills. This cannot be done with a machine.

Dan enjoys the challenge of work, making a difference and accomplishing a task. Dan has shown great persistence in his 32 years. With his guidance, the warehouse moves 13-14 million pounds of paper a month through Rohn’s doors. That’s no small task.

His greatest memory of Rohn Industries is being a part of the new baler equipment installs, the large projects that make the work easier, faster and better. He is proud of the work he does, he’s proud of his co-workers, and says the work has been good.

Dan plans to retire at age 62, he is getting his life in order at home and needs to turn his attention to the next generation at work. He hopes to train up a new group that is there for more than a paycheck. He wants the new team to know the value of working hard and having a strong sense of accomplishment. Dan says that they’ll be able to see they’re part of something bigger than themselves, and how their efforts help them buy a new car, new house or put their kids in a great activity.

Dan’s married to Barb and they have raised their 4 children together in Minneapolis. Dan says his second family are his Rohn Industries co-workers, “I’ve spent 8 hours a day for over 32 years with these guys and have grown to appreciate them like family. Eric, Bob, and John G. have made lasting impressions on me.”

Dan has enjoyed his more than 32 years at Rohn and says, “It’s been a good time!”

“ Friendly, reliable staff, who are always on time. Trucks that are built for safe handling of sensitive information. We are very happy with the safety and confidentiality. It's always a good day when Shred Right comes!
First National Bank Northfield
“ Shred Right has been our company of choice for a number of years. As a bank, we have a large amount of data that needs to be taken care of properly and the folks at Shred Right take care of that.
FNB Osakis
“ Shred Right has good service, is flexible and prompt. We like that service is on call and as we need for pick up.
Integrity Wealth/Raymond James
“ Shred Right has been a great document security company to do business with. The customer service team is very responsive and the driver we have does a great job at minimal disruption.
Micron Metalworks
“ Shred Right has always been prompt and willing to work around any time frame that we have in mind. They are a very friendly company that resolves all of our data-destruction needs.
National Communication Services, Inc.
“ Shred Right provides great, reliable service we feel very good about. Highly recommended!
Ridgewater College