In 1988, Rohn Industries moved to its current facility, and as the company grew, so did the variety of roles Bob had an opportunity to perform. He has driven nearly every kind of vehicle that has been in Rohn’s fleet. Throughout Bob’s tenure, if he was needed in dispatch, he filled in, he’ll work in the warehouse as needed, and has worked closely with Rohn’s plant manager to support transportation through a variety of roles. Bob has watched the company grow from two trucks to the fleet Rohn has today.

As technology has been sourced to streamline many operations at the company, Bob has learned or led new ways to get the job done.

If you ask Bob about his favorite memories at Rohn Industries, he’ll likely tell you about two. First, he had the opportunity to visit a Pre-School class at Minnehaha Academy in 2002 where he earned the nickname “Driver Bob.” He was there to let the kids explore the truck, load cardboard onto the truck to learn about recycling, and he remembers it as a fun day being out in the community. 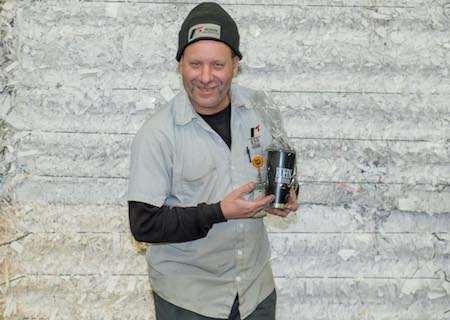 Bob’s other proud moment was earning his Class A Driver’s License. Earning his CDL allowed Bob to drive all the vehicles in the Rohn fleet, and expand his capabilities.

Bob attributes part of his staying with the Rohn Industries family for over 33 years to the fact he feels that the leadership group has faith in his abilities. He also believes that the company is run in a way that allows him to get his job done in an efficient manner.

Looking toward the future, Bob looks forward to retiring as a Rohn Industries employee, finding time to fish, and spending his time with his wife Michelle, son Jordan, and daughter Kayla.

Bob is proud of his 33 year tenure, and Rohn’s CEO, Ron Mason explains how Bob has contributed to the company’s success, “Bob is an all-around good guy, loved by our customers and his company mindedness is truly appreciated.”

Congratulations to “Driver Bob” for being part of the Rohn Industries family for over 33 years!

“ Shred Right handles all of our needs with efficiency. They are always on time and delivered what was promised.
United Prairie Bank
“ Shred Right has good service, is flexible and prompt. We like that service is on call and as we need for pick up.
Integrity Wealth/Raymond James
“ Friendly, reliable staff, who are always on time. Trucks that are built for safe handling of sensitive information. We are very happy with the safety and confidentiality. It's always a good day when Shred Right comes!
First National Bank Northfield
“ Shred Right provides great, reliable service we feel very good about. Highly recommended!
Ridgewater College
“ I would highly recommend Shred Right to anyone looking for safe and secure document destruction. They provide a very professional and timely service.
State of Minnesota
“ Shred Right has always been prompt and willing to work around any time frame that we have in mind. They are a very friendly company that resolves all of our data-destruction needs.
National Communication Services, Inc.